Mark Benjamin, Community Relations Director remarked “Seneca Meadows is pleased to partner with Generations Bank to produce this impactful fundraiser each year.”
The funds raised for the American Cancer Society are to be used locally to support the efforts they lead in fighting cancer in our community.

“Just the word, ‘cancer’ makes many of us cringe, because it has touched so many lives. It’s not always life or death, but it is always relevant in our community. We’re proud to be in the fight.” noted Menzo Case, President & CEO of Generations Bank. 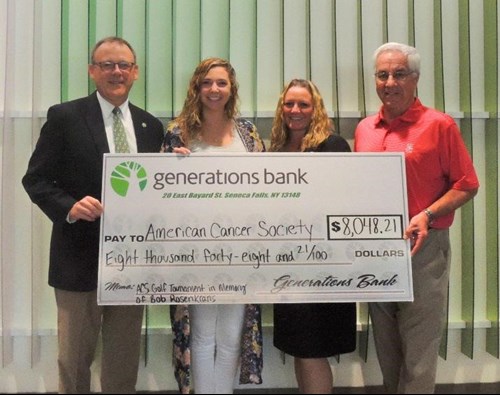 Save the date for next year’s tournament on Wednesday, June 19, 2019 at the Seneca Falls Country Club. We will be doing something special next year to celebrate the 40th Anniversary of this tournament so stay tuned!

Please note: You are now leaving Generations Bank and entering another web site created, operated, and maintained by another agency. Generations Bank is not responsible for any of the content on the site you are entering.